Ilwaco City Hall will be closed on Monday, May 28th, in recognition of Memorial Day. We hope you have a wonderful and safe weekend!

In case you’re not sure why we’ve been celebrating this day in the United States since shortly after the Civil War, here is a quote from a memorable speech given by President Reagan at Arlington National Cemetary in 1986:

“Today is the day we put aside to remember fallen heroes and to pray that no heroes will ever have to die for us again. It’s a day of thanks for the valor of others, a day to remember the splendor of America and those of her children who rest in this cemetery and others. It’s a day to be with the family and remember.”

Since 1948, the 3rd U.S. Infantry Regiment (The Old Guard) has honored America’s fallen heroes by placing American flags at gravesites for service members buried at both Arlington National Cemetery and the U.S. Soldiers’ and Airmen’s Home National Cemetery just prior to the Memorial Day weekend. 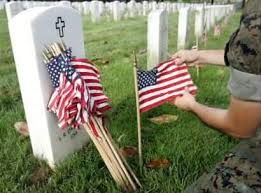 Oliver Wendell Holmes, who served in the Civil War said “At the grave of a hero we end, not with sorrow at the inevitable loss, but with the contagion of his courage; and with a kind of desperate joy we go back to the fight.”

The following is an estimate of how many U.S. Servicemembers we have lost in battle: